Bungie has disabled the new Destiny 2 Exotic weapon, Quicksilver Storm, in high-level content ahead of Friday’s race to complete the game’s newest raid, the revamped King’s Fall from Destiny 1. Quicksilver Storm is the latest casualty on the list of weapons and Exotic armor pieces that Bungie has disabled thanks to bug and glitches that came with the release of its latest content release, Season of Plunder.

Quicksilver Storm is an Exotic auto rifle that has some special properties–under the right circumstances, it can fire missiles like a rocket launcher and grenades like a grenade launcher. That latter capability is the source of the problem. Bungie rebalanced Heavy ammo-firing grenade launchers with its Season of Plunder patch, intending to make them do more damage and thus be more viable in high-level content. However, grenade launchers have been doing tremendous amounts of damage since the patch on Tuesday, August 23, dishing out something like 150% more damage than before the patch. That has made high-level content, like the recently released Duality dungeon, pretty easy for players to complete. 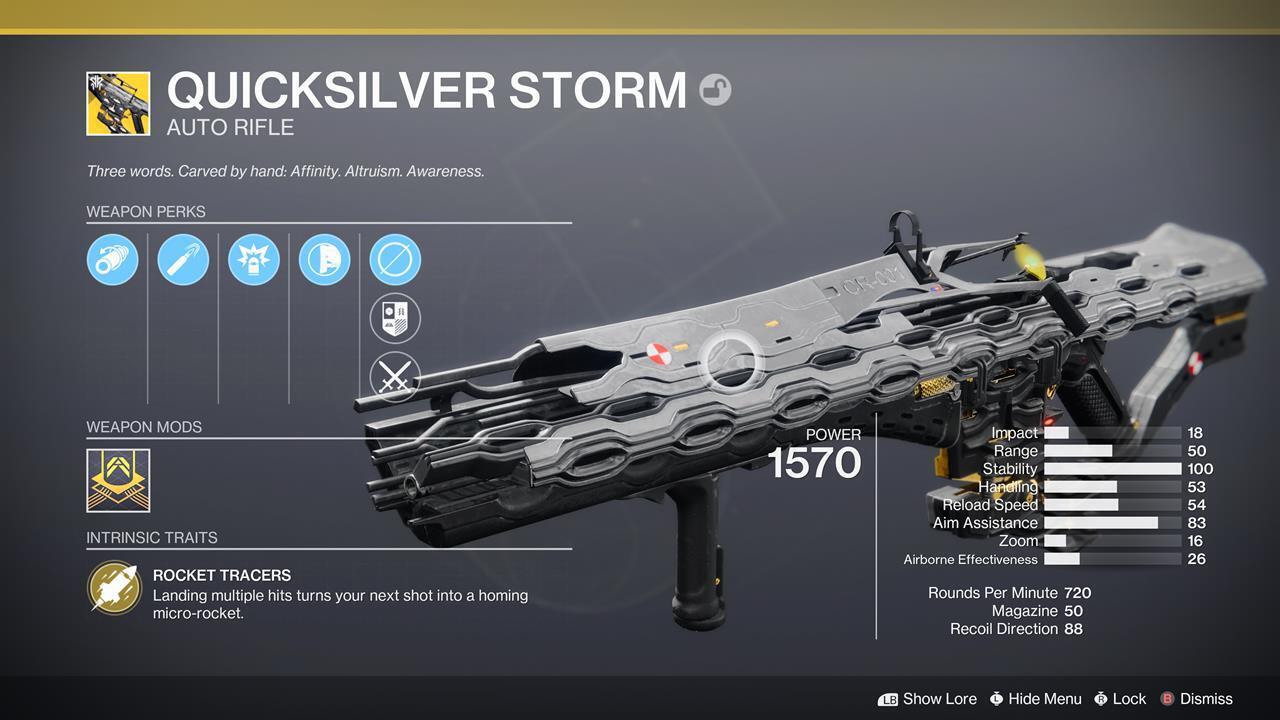 Quicksilver Storm can shoot like an auto rifle, a rocket launcher, and a grenade launcher.

As a result, Bungie disabled all heavy grenade launchers, except for older “sunset” weapons that aren’t viable in most player-vs.-environment content. It seems Quicksilver Storm might have evaded that ban, allowing it to dish out huge damage numbers with its grenade launcher ability. Bungie announced on Twitter it was disabling the gun, but only did so for dungeons and raids.

Due to an issue, we have disabled the Quicksilver Storm Exotic Auto Rifle in all raids and dungeons.

Dungeons and raids provide some of the best rewards in Destiny 2, so disabling guns that remove the challenge from those activities makes sense. But it’s particularly important right now, because Friday marks the release of King’s Fall, a raid from The Taken King, a Destiny 1 expansion, that has been revamped for Destiny 2. The first 24 hours of the raid’s release will see teams racing to be the first to complete the raid, with more than just bragging rights on the line: Bungie also awards the first team with a physical championship belt, and anyone with a successful completion on the first day earns a special in-game emblem. Bungie enables a “contest mode” for the raid that tamps down on player levels to make sure everyone has a level playing field for the day one race–so it makes sense it would disable grenade launchers (and anything else that gives an unfair advantage) if they’re not working as intended.

The King’s Fall raid goes live with Destiny 2’s daily reset at 10 AM PT / 1 PM ET on Friday, August 26. Contest mode lasts for the first 24 hours, after which players can take on the raid without their Power levels being capped, allowing players who hit the game hard in the first week to take greater advantage of their gains. It seems likely that Bungie will release a hotfix to deal with grenade launcher soon after–the game is already receiving a hotfix today, although we won’t know what it entails until the developer releases patch notes to go with it.