Epic Games’ battle with Apple and Google has spawned a spoof 1984 commercial, a hashtag, and even a surprising market for overpriced second-hand iPhones, all because of the 30% platform fee charged to developers hosting a game on Google Play or the App Store. A Bloomberg feature has charted the origins of that 30% fee all the way back to the Nintendo Entertainment System in the early 80s.

The three companies agreed on a 10% licensing fee for appearing on Nintendo’s proprietary platform, but with Hudson Soft unable to manufacture its own cartridges, it paid Nintendo an additional 20% to manufacture the cartridges for its games as well. 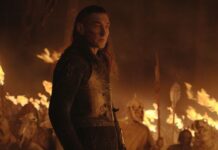 Amnesia: The Bunker gives the player a gun — but at what cost?

Like A Dragon: Ishin Combat Trailer Reminds You To Bring A Gun To A Swordfight

Amazon’s Lord of the Rings show is recasting its most interesting...

Amnesia: The Bunker gives the player a gun — but at...

Like A Dragon: Ishin Combat Trailer Reminds You To Bring A...

Amazon’s Lord of the Rings show is recasting its most interesting...