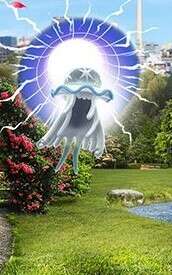 Nihilego is coming back to

Nihilego is a Poison and Rock-type Pokemon. This means it takes super effective damage from Psychic, Water, and Steel-type attacks. It also means that it will take double super effective damage from Ground-type attacks, so these should be your first choices. Some recommended Ground types include Landorus, Excadrill, Garchomp, and Groudon. If you don’t have strong Ground-type counters, these are some other recommended Pokemon to use against Nihilego raids:

A Mega Tip: A Mega Evolved Pokemon boosts the damage of all Pokemon in the raid by 10%, and the damage of all Pokemon using attacks that share a type with the Mega Evolved Pokemon by 30%. Coordinate those Megas with your raid group for added damage. Note that while Mega Steelix will boost the damage of fellow Ground types in the raid, its defensively oriented stats mean it likely won’t output enough damage of its own to be worth using. Mega Alakazam, Blastoise, or Scizor would be ideal Megas to use in Nihilego raids.

Don’t be afraid of the shadows: Shadow Pokemon deal 20% more damage than their non-shadow counterparts, so the shadow versions of any of the suggested Pokemon that have them can help you win.

Nihilego’s double weakness to Ground-type attacks means that it should be relatively easy to take down even with small groups who focus on using Fairy Pokemon.

Is Nihilego worth raiding for more than a Pokedex entry? When it first released during the Global Go Fest event, Nihilego wasn’t worth much consideration due to its lackluster fast move selection. The Season of Light breathed new life into Nihilego by giving it access to Poison Jab, a great Poison-type fast move. Nihilego is the top Poison-type raid attacker, and although that typing isn’t used that often in raids, it could be worth having a good Nihilego or two for your anti-Grass and Fairy roster.

Nihilego also has a niche in Master League PvP. Although its double weakness to Ground and inability to threaten Steel-types hold it back against large portions of the meta, it is one of the hardest counters out there to Zacian, one of the most dominant Pokemon in the Master League. That use might not be worth it to many players to invest the resources in building a level 50 Nihilego, but others might enjoy going Zacian hunting with it.

Sky: Children Of The Light Is Out Now On PlayStation

Pokemon Scarlet And Violet: How To Relearn Moves

Pokemon Scarlet And Violet: How To Get The Lucky Egg

Sky: Children Of The Light Is Out Now On PlayStation