Marvel’s Midnight Suns contains a few side quests and collectible hunts that you can choose to complete when you’re not busy fighting Hydra and stopping Lilith’s demon-related plans. There are 22 Marvel-themed tarot cards to find inside the Abbey home base and the surrounding forest, but you’ll need to get all Words of Power to access the entire map. We’re here to show you exactly where to look for each card.

Three tarot cards can be found inside the Abbey’s main building, and The Moon is included in that trio. It’s inside the forge room, next to a large bookshelf. The Moon is, of course, represented by Moon Knight for the card’s art.

The Star is in the same room as The Moon–it’s on the opposite side of the forge, on top of a red workbench. Nova is the character who was chosen to represent this arcana, and he’s used in its card art.

Strength is represented by Thor here, and the tarot card is inside the Abbey’s chapel. It’s sitting next to a small pedestal at the southernmost tip of the building.

It’s time to venture outside of the main building. Temperance is sitting between two rocks just outside the Abbey. Leave the War Room and head east for a few seconds to find this tarot card. Cloak and Dagger represent this arcana as a pair.

The Sun is also found around the border of the Abbey. It’s northwest of the Blood Gate fast travel point, on the edge of a small pond. The card uses Johnny Storm, AKA the Human Torch, for its art and description.

This tarot card is sitting on a rock, just northeast of the Standing Stones. Your search for the Moon Seals will bring you here to open the first Blood Gate. Jean Grey is used to represent the High Priestess on this card.

The next few cards can all be found on the southwest side of the map. The Justice card uses She-Hulk for its art, and it’s found right behind Agatha’s Altar. This is the same spot where the EMO KIDS meetings take place, so you’ll end up here eventually.

The Death tarot card is also right behind Agatha’s Altar, just a bit further back than Justice. It’s sitting on a pile of rocks on a cliff that overlooks the south side of the Abbey, and Death herself is used in the card description.

This card is literally a few steps west of Agatha’s Altar. It’s on top of what looks like an engraved stone coffin, and the arcana is represented by one of the luckiest mutants around, Domino.

The Hermit is right next to the pedestal that holds the Air Rod, so you’ll run into it naturally by completing the Moon Seals side quest. The card is west of the Whispering Woods fast travel point, and Namor is used in its art.

The Hanged Man is the final tarot card in this region, but you’ll need to use the Reveal Word of Power to get to it. Use Reveal to create a bridge just behind Agatha’s Altar and it’ll lead you straight to an Arcane Chest, a Haven, and the tarot card. Bucky Barnes, AKA the Winter Soldier, represents The Hanged Man here.

These next four cards are located in the northeastern section of the map. The Emperor is in a small clearing next to a table with skulls on it. The spot is just south of the Everflowing Glade fast travel point, and the tarot art features T’Challa, the Black Panther.

You’ll find The World directly north of The Emperor, at Agatha’s Cottage. The Moon Seals side quest will bring you here naturally when you follow Agatha’s instructions. The card is sitting on a table just outside the cabin, and Uatu, The Watcher, is the embodiment of this arcana.

The Hierophant is another card that you’ll likely come across while completing Agatha’s big side quest. It’s behind Shaw’s Church, and you’ll need to use the Open Word of Power to walk through the back door of the building. It’s sitting inside a wheelbarrow on the path to the red ward. Professor X is used in the depiction of The Hierophant here.

The Empress can be found sitting behind a tombstone in a cemetery, southwest of the Everflowing Glade–the same cemetery that you’ll come across when looking for the Hanging Tree. With T’Challa as The Emperor, it only makes sense that Storm would be The Empress.

Make your way to the northwestern area to find these next two cards. The Lovers is inside another, smaller cemetery to the right of the Garden of Envy. Use Open to remove the door blocking your path. This is the same cemetery you’ll enter to find a Moon Seal fragment for Agatha. Elektra and Daredevil represent The Lovers as a pair in the tarot art.

The Chariot is found even further west. It’s floating in front of the final Moon Seal trial, directly north of Lilith’s Garden. use Reveal to create a bridge that’ll lead right to the card. The Silver Surfer takes the role of The Chariot in this Marvel-themed deck.

The final five tarot cards all require the Break Word of Power, which is the most difficult to obtain. Once you have it, use Break on the wall northeast of The Shop to get to Misty Moors. The Judgement is floating above a dried up well, and the arcana is represented by Galactus.

The Devil is also in Misty Moors, just a few steps north of where you found the previous card. It’s on a small desk to the right of the path. The Devil is depicted as Daimon Hellstrom, also known as Hellstorm.

The Magician is found more toward the center of the map. You’ll need to use Break on a wall located between Hunter’s Folly and Dreamer’s Descent. The card will be sitting on a table on the other side of the wall, and its arcana is represented by Doctor Doom.

The Tower card is actually a bit trickier to find. It’s behind a giant pile of rubble, southeast of the Dreamer’s Descent fast travel point. Use Break to clear a path and you’ll see the card sitting on a desk in a clearing. The Tower is represented by the Baxter Building, which is a literal tower used by the Fantastic Four.

This last card is south of Gideon’s Cross. You can reach it by using Break along the path that heads north from Dreamer’s Descent. The card is under some kind of shrine, and Deadpool is used to depict the arcana.

When you’ve collected all 22 tarot cards, you’ll immediately be rewarded with the Salem suit along with its signature Salem’s Savior passive ability. It also comes with two new swords that match the medieval theme. Open up the Customization menu to equip the gear whenever you want. 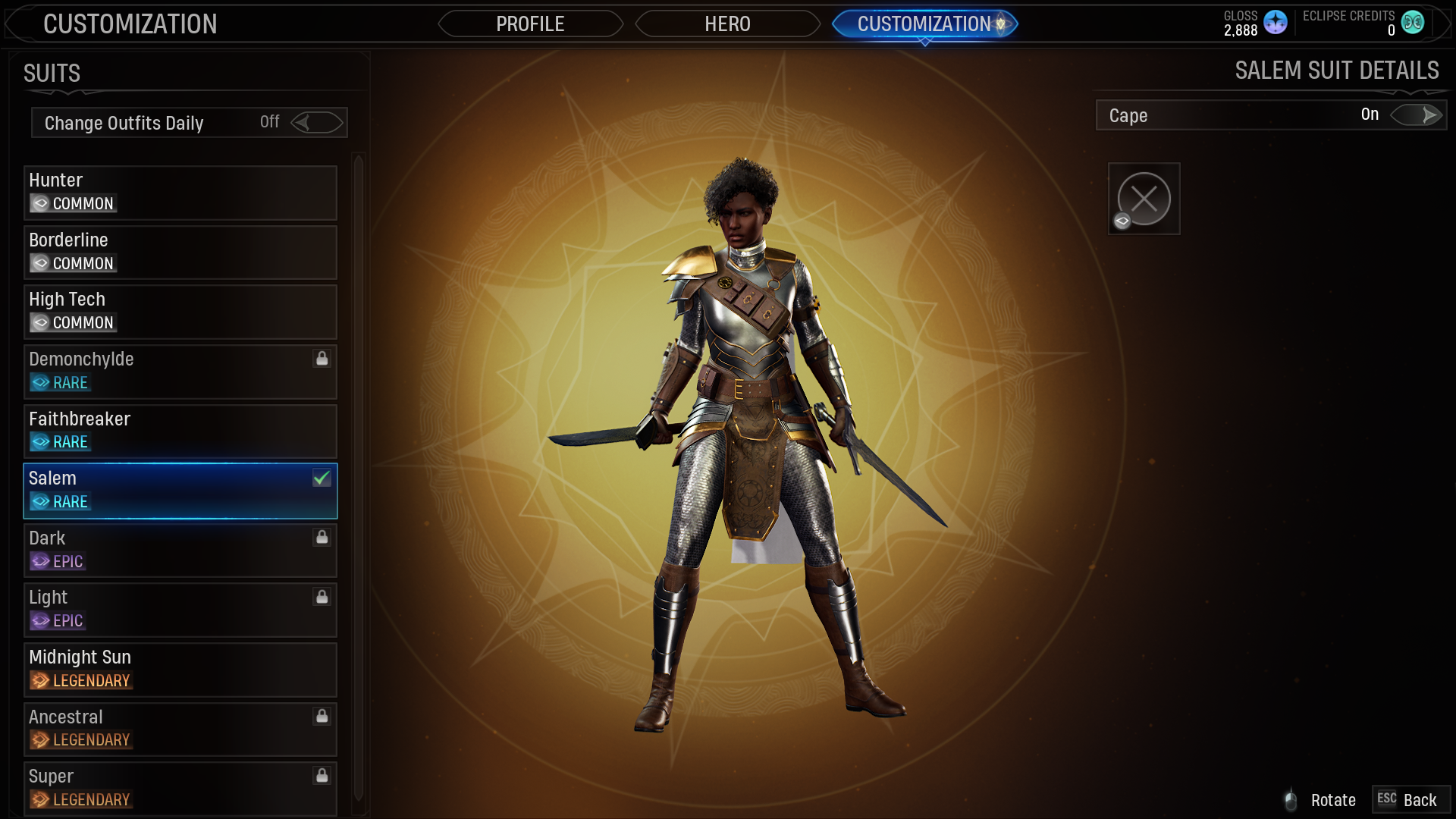 The suit looks like an upgraded version of the very first one that the Hunter wears at the beginning of the game. Its passive gives a 50% chance to draw a card whenever the Hunter defeats one or more Lilin with an ability. There are better passives in the game, but this is a great one for when you know Lilin will be in a combat encounter.