Tighnari is a Dendro bow user who’s joined the game in version 3.0. He’s the new main banner character and he’s currently the only five-star Dendro character as well. Collei is free, but you may want to get Tighnari too if you’re near the in-game pity, simply to take advantage of Dendro Resonance. If you plan to level up Tighnari, these are the required materials.

Like Collei, the majority of Tighnari’s ascension materials can be found in the new region, Sumeru. Nagadus Emerald is a stone that drops from the new normal boss, Jadeplume Terrorshroom. The creature is located in the northwest corner of Sumeru and can easily be found if you interact with the nearby Statue of the Seven to reveal that section of the map. You can also convert other elemental stones into Nagadus Emerald by using an alchemy station.

The Nilotpala Lotus is a new plant that’s native to Sumeru. It’s mostly found in and around the Lokapala Jungle to the northeast and the Avidya Forest nearby. The lotus only blooms at night near water though, so keep that in mind when searching for it. Here’s a screenshot of the HoYoverse interactive map showing where to look for yellow the plant. 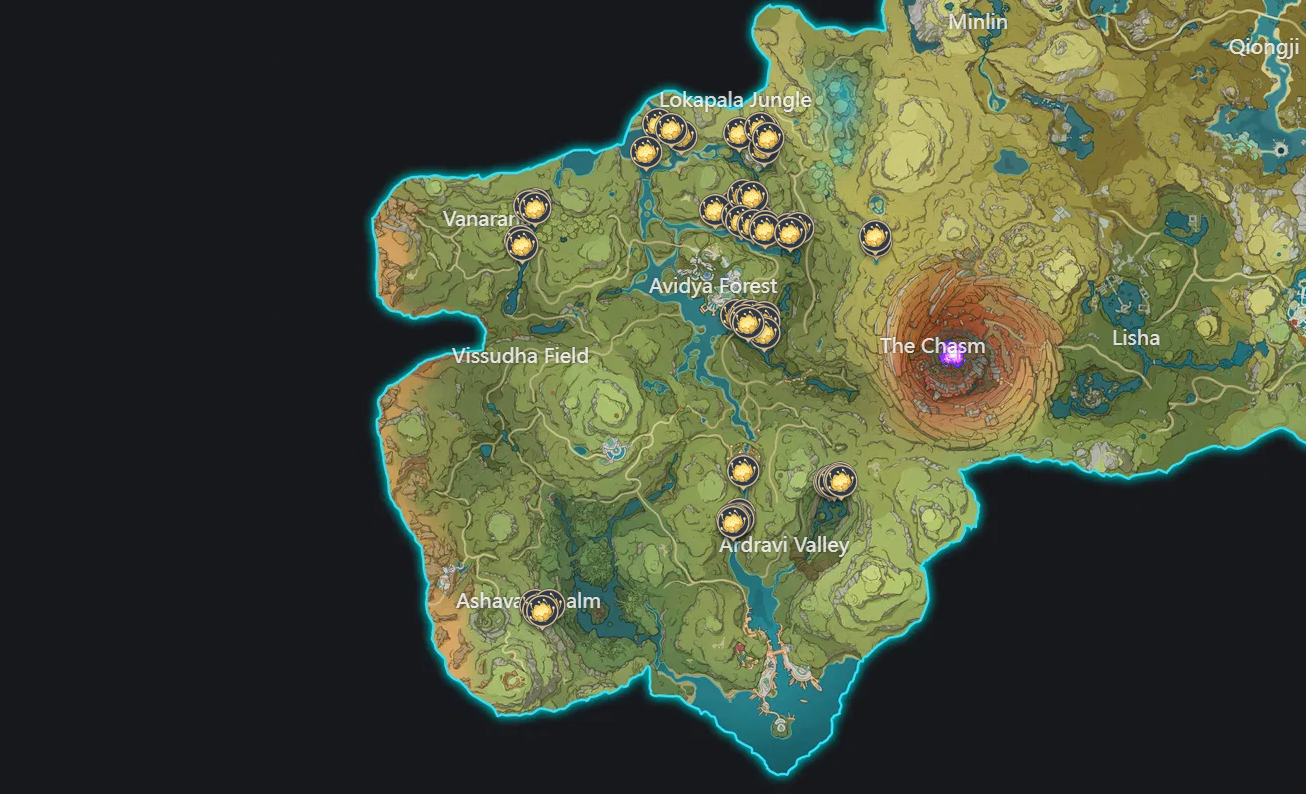 Most Nilotpala Lotus plants are in northeastern Sumeru.

These monster drops come from new enemies introduced in the 3.0 update. Every single type of fungus enemy in Sumeru will drop these items at different rarities depending on their level. They can be found all over the region, but you can use the Adventurer Handbook to find the exact locations for these enemies.

Majestic Hooked Beaks are boss drops that come from the new Jadeplume Terrorshroom normal boss. Farm the boss to get both the beaks and Nagadus Emeralds at the same time to save some time. Collei also needs both of those items to ascend, so it’s worth grinding if you like both characters.

Meaning of Aeons is an item that drops from the Raiden Shogun weekly boss found underneath Narukami Shrine in Inazuma. The boss is only available to fight after Raiden Shogun’s second story quest, Transient Dreams, is completed. Once again, Collei also needs materials from this boss, so you’ll be farming for the both of them by fighting her.

Crowns of Insight are usually only awarded upon the completion of main story missions like Perilous Trail, or major limited-time events like the recent Summertime Odyssey. These items are so rare that players typically save them for their strongest main DPS characters, or whichever characters they like the most.