It’s been more than seven years since EA Sports released a golf game, but the drought is about to end. EA Sports PGA Tour releases on March 24 for PS5, Xbox Series X|S, and PC. Based on early gameplay footage and the wealth of announced content, golfers have a lot to be excited for.

EA Sports is really emphasizing Major championships with this new release. Unlike the game’s main competitor (PGA Tour 2K23), all four of golf’s most prestigious tournaments will be included. That means you’ll get to tee it up at the famous August National, home of the Masters Tournament, as well as the US Open, PGA Championship, and The Open.

At launch, EA Sports PGA Tour will have an expansive lineup of 30 real courses, including all of the Major championship tracks from 2021 through 2023. To promote accuracy, EA Sports used drones and LiDAR helicopters–which are specifically designed for mapping–to create realistic terrain. Though the average golf fan most likely wouldn’t be able to spot inconsistencies in green contours or fairway undulations, EA said that even Augusta National’s expert caddies noticed the realism. The caddies putted on the greens without in-game assist measures and found that their local knowledge was enough to drain putts.

In the career mode, golfers will make their way through the PGA Tour schedule and try to achieve enough points to make the FedExCup Playoffs You’ll be able to create your own golfer–male or female–and earn experience points that can then be used to improve your golfer’s attributes. The PGA Tour schedule is the focus, but the sim also has multiple well-known tournaments for female golfers, including the Augusta National Women’s Amateur and The Evian Championship, one of the LPGA Tour’s Major championships. 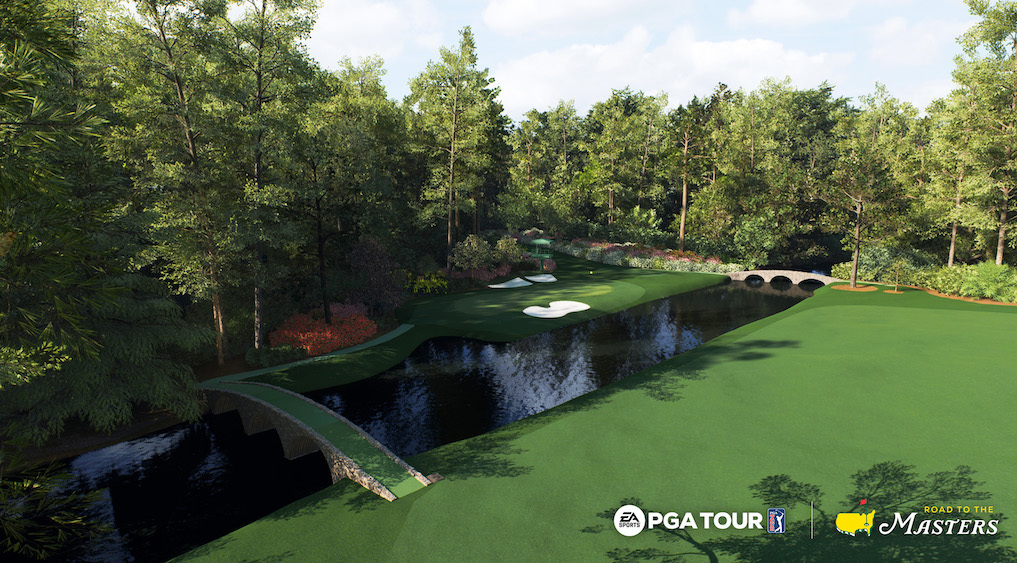 The 12th hole at Augusta National, home of The Masters

In addition to playing as your created golfer, you’ll be able to play as some of the best golfers in the world, each of whom had their likeness and unique swing captured. The whole roster hasn’t been revealed, but there are plenty of big names already: Scottie Scheffler, Patrick Cantlay, Jordan Spieth, Tony Finau, Nelly Korda, and Lexi Thompson.

Notably, you won’t find Tiger Woods on the roster. The golf legend, who appeared in the title and on the cover of many entries in EA’s golf series, now stars in 2K’s franchise. Woods was the cover athlete for PGA Tour 2K23.

EA Sports integrated the PGA Tour’s Shotlink data tracking to convert top pros’ games to virtual form. For the past two decades, Shotlink has logged player swings and performance to come up with detailed stats, which are used in EA Sports PGA Tour’s player ratings system.

The game also uses TrackMan, a high-end launch monitor that the majority of pros use to hone in on swing data. In practice, TrackMan statistics such as ball and swing speed, launch angle, apex, and curvature will be shown on screen as you play. And since the game has 20 different shot types for each club, there will be lots of data for golf nerds to pore over.

More details on EA Sports PGA Tour will be released in the coming weeks. Preorders go live today for both the standard and deluxe editions. The deluxe edition comes with three-day early access as well as a slew of in-game content: Scotty Cameron putter, in-game gear themed around The Players Championship and The Masters, and 1,500 Premium PGA Tour points (in-game currency). Microtransactions will be limited to cosmetics.

Like other EA sports sims, EA Play members will be able to check out a 10-hour trial starting March 21. Meanwhile, EA Play Pro members will have full access to the deluxe edition of th game starting that day.

You can check out the revealed courses below: