Amazon is sweetening its deal on the Xbox Series S holiday console by throwing in $40 digital credit to use on future Amazon purchases. Since the console is already available for just $240, this is easily one of the best deals we’ve ever seen on the Xbox Series S. You’re essentially getting the Xbox Series S for only $200. To get this deal, you have to enter promo code XBOX when checking out. We wouldn’t be surprised to see this deal sell out quickly, so make sure to snag it while you can.

For shoppers who don’t know the difference between Microsoft’s latest consoles: the Xbox Series S is a smaller, digital-only model of the Xbox Series X. The Series S can play all the same games as the Series X and supports many of the same next-gen features like Quick Resume, Raytracing, 120FPS gameplay, and Smart Delivery.

The main differences are that the Xbox Series S doesn’t have a disc drive and can only play digital copies of games downloaded from the Microsoft Store app, and it only plays games in 1440p QHD rather than native 4K–though the device can upscale to 4K if you play and a UHD TV. The Series S also has a smaller 512GB internal SSD for storage compared to the Series X’s 1TB SSD, but you can purchase expandable storage. Check out GameSpot’s full Xbox Series S review and Xbox Series S versus Xbox Series X breakdown for more information. 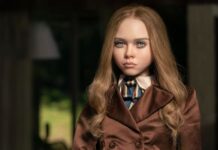 M3GAN, Netflix’s You People, and every other movie you can stream from home this weekend

Your Friendly Neighborhood Warlock | Iron Banter: This Week In Destiny 2

Preorder Atomic Heart At A Big Discount For PC

M3GAN, Netflix’s You People, and every other movie you can stream...

Your Friendly Neighborhood Warlock | Iron Banter: This Week In Destiny...

M3GAN, Netflix’s You People, and every other movie you can stream...