Atari recently released its half-year earnings report for the current financial year, and it didn’t seem to have much good news for the Atari VCS console. As picked up by Tom’s Hardware, the report pointed to a decline in Atari’s hardware sales, along with a reorganization of the hardware side of the business that would involve suspending relationships with the VCS’ manufacturer.

The report points to a 92% decrease in hardware revenue year-on-year, dropping from $2.44 million to only $212,466. Atari points to a decline in “cartridge activity” to account for this drop, as well as “underperformance by the VCS.” Overall, Atari reported a 27% decrease in revenue from the same period last year.

The report also mentions that Atari have been busy with a reorganization of its hardware business for the first half of the financial year. This includes “the suspension of direct hardware manufacturing relationships, notably with regards to the Atari VCS.” Atari specified that it wouldn’t be giving up on the console, instead opting for “a new commercial strategy [that] has been implemented as of the end of calendar year 2022 and that will continue in calendar year 2023.”

In a statement sent to Tom’s Hardware, Atari reaffirmed its commitment to the console, saying: “We suspended our relationship with the original manufacturing partner of the Atari VCS, but we continue to maintain inventory and fulfill new orders.”

“Atari remains committed to the VCS platform,” the statement continues. “We have been adding more support for game developers and continue to add new games to the store. Hardware is an important part of Atari’s legacy and will continue to be a part of our long-term strategy.

“We have several hardware and software projects in development, under licensed contracts, that will expand the VCS ecosystem and create additional utility for users.”

One of Atari’s hardware projects saw three new Atari 2600 cartridges released earlier this year, while its digital projects have included Atari 50: The Anniversary Celebration, an anthology of games, interviews, and memorabilia released for the PlayStation, Switch, Xbox, PC, and, of course, the Atari VCS. 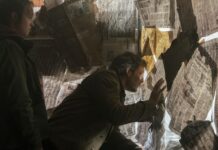 The Last of Us episode 5 will air early, out of the way of the Super Bowl

The Last of Us episode 5 will air early, out of...

The Last of Us episode 5 will air early, out of...